Stop! Before throwing any empty jars or tubes in the bin, think about the canopic jar challenge. 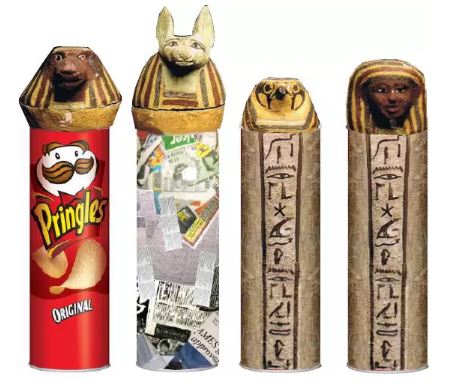 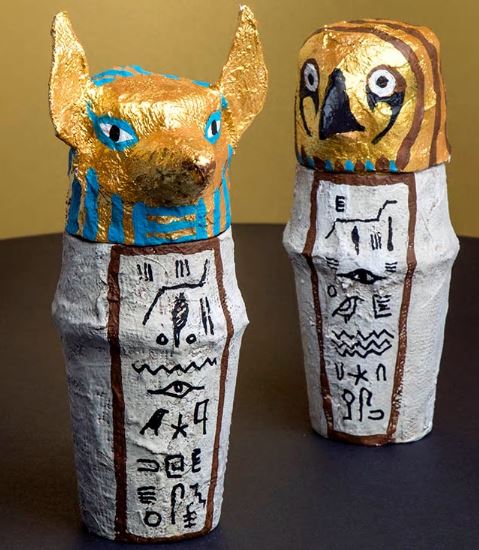 Egyptian Canopic Jars
Although it may seem gruesome to us, the Egyptians removed certain body organs and placed them into special jars as preparation for the afterlife. Above, we have two traditional animal gods Quebhensenuef (kwa-ben-zen-uff) the falcon and Duamutef (dew-a-moot-eff) the jackal. Follow the instructions below to make your own set of canopic jars. Once you have made your jars then decorate them with hieroglyphs or other patterns.

Step 1
Take some newspaper sheets and screw up into a small four-inch ball, then form the ball to resemble an animal head. Select any animal head you prefer, such as a bird, dog or cat.
Step 2
Tape the newspaper animal head onto the top of a Pringles canister using masking tape.
Step 3
Combine one cup of flour, one-half cup of salt and one cup of water into a bowl. Stir the mixture with a spoon for two minutes to combine the ingredients completely.
Step 4
Cut more newspaper into strips measuring two inches wide and six inches long.
Step 5
Dip the strips into the papier-mache mixture, and then drape the strips over the canister. Cover the canister with four layers of papier-mache strips.
Step 6
Apply more papier mache strips onto the top of the canister, including the animal head. Cover the top with four layers of papier-mache. Allow the entire canister and head to dry for 6 hours

To finish, cover with a primer coat of paint and then decorate with hieroglyphs and patterns.